Takes One to Know One 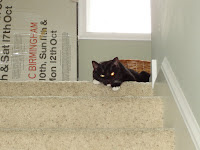 Theo is about the most trusting soul in the world. He loves to wander thoughtlessly between legs and rub up against complete strangers. He's the first to greet visitors at the door. He purrs at the drop of the hat.

But at the same time, he's got a paranoid streak to him that makes him jumpier than a kindergarten class on a trampoline. There are times he'll be peacefully sitting on my chest when a noise will so startle him that he'll dash off madly to somewhere else. He often sits looking alert as if something is about to jump out at him from around the corner. This is ironic since he often sits near a corner and when Thompson or Diego appear he'll be the one to jump out at them. It's seldom goes the other way.

I attribute a lot of this to the accident he had as a kitten when apparently a child sat on him and damaged his back legs. My guess is he was totally being his sweet trusting self when the accident occurred and thus sometimes now thinks something unexpected is just about to happen at any moment.
Posted by Dma at 9:45 PM

What a precious guy Theo is! I love social cats that come up and investigate.