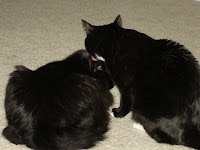 I was awoken this morning by the sound of two cats chasing each other up and down stairs from one end of the house to the other.

I didn't even have to open my eyes to know it was Theo chasing Diego-san. The chase ended like most of their chases end- with Diego hopping up on the piano via the keyboard (playing an improvised tune in the process) up where Theo couldn't reach him. This was all fine and good except it was 6:15 on a Saturday morning.

Later on in the morning I went into the kitchen and saw Theo sitting on the kitchen table staring up at the ceiling. I looked up to see what had gotten his attention but didn't see anything other than some paint peeling. I walked a little further and saw Diego sitting on the stove also staring at the ceiling only in the direct opposite direction of where Theo was looking. I looked up at where Diego was looking and saw a spider. My guess is Theo who is doing his best to learn from Diego-san, saw him looking up and decided he too should look up. The only problem was he wasn't looking up at the same area to where the spider was and thus missed the whole point of what Diego was doing.
Posted by Dma at 9:39 PM

That is hilarious! Theo is trying his best to copy his older brother, but doesn't quite get it right yet : )