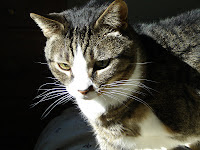 The past couple of nights Thompson has been seen occupied in my upstairs bathroom.

Both nights he was busy keeping on eye on a tiny little bug crawling around the floor. The bug, no more than a centimeter long, is a tiny worm like creature that I'm assuming got in the house through the vent that leads out to the roof.

Thompson swats at it with his lone front paw, leans down as if to try and eat it and then just watches the thing squirm and wiggle. I ruined his fun by flushing the bugs down the toilet but I've been plentiful and effusive in my praise. "Good job Thompson! Great spot!"

It's amazing how talented the boyz are in spotting bugs. I haven't seen too many in my house but there will be times when we're all just lounging around and suddenly I'll see Diego move to a spot in the room. After awhile I'll see what is it that's caught his attention and only then notice a spider is up on the ceiling. They see any tiny movement.

I would have never noticed the little tiny worms had it not been for Thompson.
Posted by Dma at 9:28 AM

I'm impressed that Thompson didn't maim the worm! Do your boyz ever spot imaginary "spiders"? Kellie is famous for this. She'll watch a certain spot on the wall, cry and jump at the spot, but there isn't anything there! I'll even lift her up to take a closer look, but she still carries on as if there is an actual spider there. Who knows, maybe there is, maybe it can't be seen by the human eye!