Cartwheels Down a Gravel Road 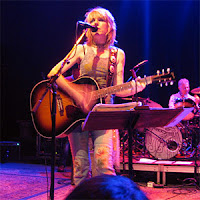 My friend T and I went to see Lucinda Williams last night. It was a good concert and it was good to catch up with T who I hadn't seen since around Christmas time.

Lucinda is one of my favorite artists. Her new CD "West" came out about a month ago and I was a bit disappointed in it. I've seen her quite a few times the past few years and she had performed several unrecorded songs the past few shows I'd been to. If she had put all those new songs on to the CD it would have been among her best. But only three of the unrecorded songs made it on to "West" and the CD is much more downbeat than I was expecting.

The live version of the songs from "West" were among my favorite performances last night. The title song in particular affected me more than the recorded version.

Of course I forgot to feed the boyz both breakfast and lunch before I left for work in the morning and I went to meet T right after work- so the boyz were plenty hungry by the time I got home and had no qualms about expressing themselves as well as Lucinda does in her songs.
Posted by Dma at 8:18 AM