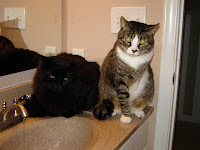 Diego-san and Thompson's trip to the vet this morning went well. I waited until the last possible moment before I pulled out their carriers. Since the carrier I use for Diego is kept in storage, he was curious about it when I pulled it out. So getting him to go inside wasn't that much of a chore.

Thompson on the other hand, hates to be confined. I have a cloth carrier that opens on top so I just have to ease him down and then try and hold him down as I zip it shut. He let it be known from the time his feet were in the carrier to the time we finally got to the vet that he was not a happy camper.

They both checked out fine. Thompson has lost a pound in the past year- which is good because I'm making every effort to see that he doesn't become overweight. I did learn (or re-learn) something about Diego's early days. When he was first brought into the vet from the shelter they thought he was a female and he was named Nicole. When they went to do spay him/her they then discovered that he was a male. I swear he still does have some feminine qualities to him so that may explain things a bit. I had heard that story at one point but had forgotten it.

Theo was glad when we returned. I think he was a bit spooked to see his colleagues leaving without him.
Posted by Dma at 10:15 AM

I'm glad Diego and Thompson's check up went well. I've never heard of a full grown cat being mistaken for the wrong sex before, very interesting : )