I had to change a burnt out headlight bulb in my Mini Cooper. The last time I had to do so (which was only a few months back making me wonder what the heck is going on...) I ended up bringing it in to a neighborhood mechanic because I couldn't figure out how to get to the bulb. As a result I ended up paying over $100, which seemed a tad high for such a simple 'repair.'

So this time I was determined to figure out how to make the change all by myself without the assistance of a professional. It took me a while to find good information (the manual wasn't much help). Last evening after work I picked up a new light bulb and began to get to work.

The first step (after opening the hood) is to remove the headlight cover. No problem there. The next step is to pull off the plastic wire cover. No problem there either. After that, things got a little dicey. There's metal piece holding the bulb in. I couldn't for the life of me figure out how to detach the metal to get at the bulb. I did everything I could think of and after I almost gave up, I pinched the clasp a little tighter than I had previously tried and the bulb fell right out.

Now was the hard part... Figuring out how the metal thing held the bulb in place was not easy. The headlight actually is part of the hood so it's placed in a strange angle when the hood is raised. I finally got things in what I thought was the right place, shut the hood, and turned on the lights. Nadda.

Now I had to figure out if the problem was beyond a burnt out bulb or if it was I hadn't assembled things correctly. After repeating the process (with a few choice curse words) I tried it again and still no luck. I then noticed that the working bulb on the other side was at the top of the head lamp not the bottom and I had changed the bottom bulb. Sure enough I flipped on the high beams and the new bulb worked.

So once again I had to take things apart, put them back together (in a different order) and after some sweat and fingers covered in grease I had my headlights working 100 percent.

Woo hoo. I looked up to see Thompson had been watching me probably wondering what the bleep I was doing that was more important than his dinner. 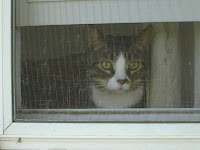 Good for you! Working on cars is very hard. I love those Mini Coopers, they are neat cars. My Mommie used to drive an MR2 and then a Miata before she got her current car, because she loves sporty little fun to drive cars.

You should have let the boyz snoopervise, they probably could have talked you right through it : )

Didn't you hear him telling you how to do it?
For Mom's Mazda, she had to remove the battery to replace the light (of course it was THAT side that burned out), then put it back to test it.

Ironically Daisy, Alex, who was featured yesterday used to drive us around town in her MR2 convertible. I loved that car...