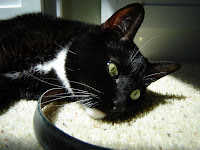 Theo woke me up in the middle of the night by hopping up in my bed and dropping a toy mouse next to me (at least it wasn't the real thing).

I assumed he wanted to play fetch with the mouse so I picked it up and tossed it over the side of the bed. Instead of chasing it Theo proceeded to climb underneath the covers.

As soon as Theo was out of sight, Diego-san who was lying on the foot of the bed tore after the mouse and began swatting it all over the upper wing of the house. The sound got Theo's attention and he crawled out from underneath the covers to join Diego-san in some midnight madness.

I wish there was some Midnight Madness at my house. Pixie does not like to play at midnight, or any other time.