I Heart Peigh Gee (Well Not So Much) 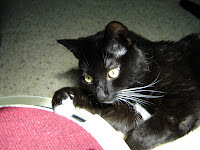 Theo proved himself a far smarter being by not paying any attention to my strategy talking session and instead occupying his time with playing with a toy mouse.

We'll see if Peigh Gee is a mastermind or leading the way to her own demise.
Posted by Dma at 8:12 AM

I think they made a bad mistake. I thought at tribal council that the two traded survivors would be exempt from being voted off for at least the first vote. It seemed a little unfair to me to get traded and then voted off.

Oh, I don't like it when someone throws a challenge and it was especially a slap in the face to James that they thought it was so funny. I think they made a big mistake - my Mum does too ;)