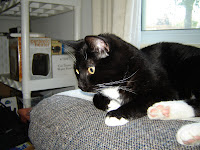 For the second day in a row- Theo had quite the excitement to endure. Today was his annual trip to the vet for a checkup and shots. He's easy to transport- he rarely is difficult to locate in the house and he doesn't struggle when I place him in his carrier.

I found it curious that neither Diego-san or Thompson batted an eye as I loaded Theo up and brought him to my car.

Theo did however let out his displeasure over the five minute car trip to the vet's. He bellowed louder than I ever heard him bellow. And he constantly meowed while I signed in at the front desk. By the time the vet saw him however, she had a difficult time listening to his heart and lungs because he was purring so loudly. He checked out fine. He's lost half a pound since last year (some of it no doubt from all the heart pounding excitement over the last few days).
Posted by Dma at 12:22 PM

I'm glad Theo's vet appointment went well. I take it you take each boy seperately - I've always wondered if people with 2 or 3 cats load them all into the car and take them to the vet in one go. I find it hard just packing Kellie to the vet - she is no lightweight and like Theo she cries pitifully whilst in the car.

Actually Theo sorta loses out in the current arrangement. I bring Thompson and Diego-san in together for their annual vet appointments. This gives Theo his one and only opportunity to have the entire house to himself- but also probably leaves him wondering where the three of us are going to play and have fun.