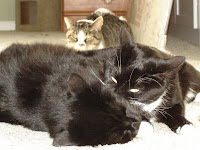 The boyz and I didn't exactly enjoy the best night last night. I ordered a turntable device that hooks up to my computer and allows me to convert LPs to digital files. This is something I've long had my eye on since I still do have quite a few LPs.

Of course hooking this device up and getting it to work wasn't exactly a matter of just plugging it in. I had to make some adjustments to both the turntable and to my computer to get them talking to each other. Of course all this had the boyz undivided attention. When I shooed Diego away he went in the bathroom and proceeded to knock over a plastic cup that was full of water spilling the water all over the vanity. So of course I scolded him and he ran downstairs.

Later on I was trying to get to sleep when I heard Theo fidgeting around. He knocked over a glass cup that was sitting on my TV stand. Luckily my upstairs is carpeted so it didn't break but I had to get up and scold him too. I wondered if Theo's behavior was tied in to Diego's behavior since the glass cup had been on that stand for weeks and the boyz had paid no attention to it all that time.

I don't like yelling at the boyz, it really isn't my nature but I was feeling a bit frustrated with the turntable project and they weren't exactly being helpful.
Posted by Dma at 8:04 AM

OMG - Kellie and I had the same sort of evening! I wonder was it something in the atmosphere?

I kept yelling no, no, no and Kellie just stared at me for a second and proceeded with what she was doing - I think they know they are in charge!

That's really odd. Maybe it was the moon or something.