That's Where They Went 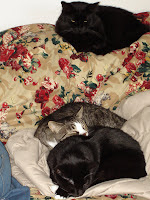 It was an exciting day for the boyz. My friend M- replaced her parents' appliances and since their refrigerator was much newer than mine, she agreed to give me the replaced refrigerator. She also gave me a couch she no longer wanted.

So M- and her friend Ivan delivered the refrigerator and couch to my house. I locked the boyz upstairs and peeked in on them occasionally as Ivan wheeled my old refrigerator out and the 'new' one in. Diego of course was dying to get out and see what all the commotion was about. Thompson and Theo were more frightened then curious.

Diego came out to explore the minute the door was opened. Thompson and Theo cautiously checked out the changes a few minutes later. In the end, Theo was the beneficiary of all the changes. Underneath the old refrigerator there were a dozen or so of the crinkly balls that he loves to swat all over the house. So his supply has been replenished.
Posted by Dma at 8:55 PM

Is that the new couch? It appears all 3 boyz have settled right in : )