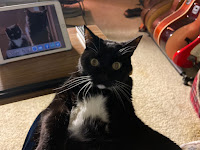 Got Theo’s urine test results back. There were no abnormalities other than the vet said it was a little dilute which could indicate kidney issues. She wasn’t too worried about it though. I’ve been a little worried since he is missing the litter box. The vet said this often is a sign of something physical since he is trying to do the correct thing.

I went to clean the litter box today and saw some liquid outside the box. Upon further inspection, it contained chunks of chicken so obviously Diego-San had urped up a meal. I muttered I was glad it was vomit and not urine. That’s probably the first time that has ever been muttered in the history of feline kind.
Posted by Dma at 12:02 AM

Good to hear the results were good for Theo :)
Sounds like maybe Diego was messing with you ;) MOL!

We’re glad Theo got some good results. Sounds like Diego-San tried to play a trick on you. :)