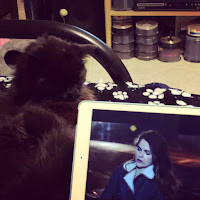 I'm a big fan of the TV show, "The Americans," which is coming to an end. There are two episodes left and it doesn't appear there's going to be a good end for any of the major characters. I've been going back to the beginning of the series and watching old episodes over. Diego-san is keeping an eye out for Russian spies.
Posted by Dma at 12:04 AM

Good to know that a kitty has your back ;)
Purrs Georgia,Julie and JJ

Good thing Diego-San is on the case. We wouldn’t want any Russian spies around here.