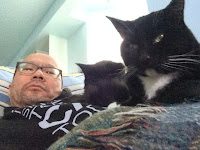 Several years ago, the handle broke off one of the two toilets in the house. To flush the toilet required removing the top where all the guts are, and manually pulling the chain. Eventually the guts themselves became further damaged meaning the water never shutoff. This meant to use the toilet I had to shut off the water to the toilet after I was done using it.

I've lived with this inconvenience for a long time (at least five years, probably closer to 10). The other day I went to shutoff the water and the valve wouldn't turn to the point where the water would shutoff. Having a leaky toilet several years ago with the resulting hefty water bill taught me this was not a problem I could just ignore even though there was no physical damage being caused by the issue. Either a plumber had to be called or I could install a new toilet.

I'm not exactly Mr. Fixit as the boyz can testify to under oath. My home repairs typically involve a lot of duct tape. Installing a toilet seemed a tad intimidating but the last toilet was one my brother-in-law installed for me so I knew what was involved. I considered just putting in a large litter box in the bathroom, which would have been fine with me, but may not have been appreciated by the few guests we have in our house. I watched a YouTube video, went to my neighborhood home improvement store and purchased a very heavy toilet. Once I got it in the house I let the boyz check out the box. I wasn't exactly in a hurry to start the project.

After a while I couldn't put things off any longer and I started unpacking the box. I was surprised Diego-san wasn't more curious than he was- usually he's the first one to come over and inspect everything. This time he left that task up to Theo. Diego-san was more curious about me shutting off the main water valve downstairs. He almost made a fatal mistake however when he finally did get around to checking the work going on upstairs. I hadn't put the seat cover on yet and Diego-san came tearing around the corner into the bathroom ready to leap on to the seat. He caught himself just in time to avoid an unexpected face full of water.

I struggled some but now have a working toilet in that bathroom. I have two fears: that the toilet will eventually fall through the floor; or that I'll come home to find the boyz up to their necks in water...
Posted by Dma at 12:03 AM

MOL! You sound like our dad. We hope you don't come home to either situation.

Sounds to me like you got it right - at least, I HOPE so!