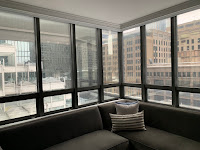 The snowstorm did impact Diego-San and Theo. I had a ticket to the Timberwolves basketball game downtown Minneapolis so rather than worry about how I was going to get home in all the snow, I decided to pay for a hotel room downtown. It has a spectacular view... And it didn’t snow as much as they said it would, but rather a lot of it came down as rain. The boyz were on their own for the night though.
Posted by Dma at 12:00 AM

We think the weather people lied.
Bet you had a lonely night in the hotel without the boys.
It looks pretty nice though.
Today it is cold, but rain is in our forecast for tomorrow too.
Purrs Georgia,Julie and JJ

The boys probably wished they could have enjoyed that view with you. :)