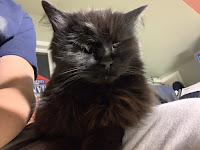 The boyz have two litter boxes, down from three when Thompson was around. I did buy an extra large litter box when Thompson was having difficulty staying in the box so that is one of the two. Apparently Diego-san and Theo have reached some sort of agreement that one box (the smaller one) is for #1 and the larger box is for #2. If they had included me in the negotiations I would have suggested switching the two since the #1 clumps take up more room than the poos.
Posted by Dma at 12:00 AM

Since we have a family of 6 (down from seven when Mr Buttons passed) we use the largest size storage box for one and one size down for the next for our box business.
They like this setup but instead of a number one in one and two in the other they just use the bigger one all the time. Dad tried explaining that most cats want their own box but what does he know. We told him April Fools Ha Ha Ha
Timmy and Family

I use different litter boxes for different things too!