Not Happy, Not at All 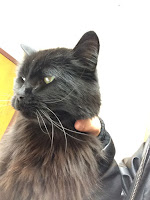 Yesterday morning Diego-san skipped his breakfast. This is a very unusual thing for him to do, so I called the vet and got an appointment for both he and Thompson (who was due to have his thyroid tested). The appointment was after work so when I got home I fed the boyz. This time Diego-san ate his entire meal.

Still, I decided it wouldn't hurt to have the vet take a look. So without much warning I loaded Diego-san into his carrier and Thompson too. It was really cold outside so I got to hear some cries of displeasure as we walked out to the car. Once in the car Thompson howled away, a combination growl and wail. Diego-san quietly meowed.

Thompson continued voicing his displeasure as we entered the building all the way through when they took him in back to withdraw blood. I could hear him howl even as Diego-san and I were directed to an examination room. I pointed out the recent scratch on Diego-san's back and the vet took his temperature saying it was a little warm but not that much out of the ordinary. She told me to keep an eye on him and bring him back in the morning if I was still concerned.  He seems fine now.

She told me Thompson has small veins so they had some trouble withdrawing blood.  Poor guy. He was pretty quiet on the drive back home...
Posted by Dma at 12:04 AM

Poor guys! I hope Thompson's test comes out well, and that this was just a temporary glitch for Diego-san

Well, we're sure Diego-san isn't too happy he got dragged to the vet for nothing. But it's better to be safe than sorry. We hope he continues to do okay...and that Thompson gets a good report on his test.

Dave, my thoughts are with you about the Thompson and Diego-San. Hope they get to feeling better.